Ever since I watched movie Coco free online, I can’t get it out of my mind. Coco tells the story of a young boy named Miguel living in Mexico (Coco is his great grandmother). Miguel loves music and must keep his love a secret from his family who has forbidden music of any kind since the days of his great great grandmother. On Día de Muertos, Miguel wants to enter a contest to showcase his musical talent, but his grandmother intervenes, reiterating the family’s ban on music.
On the Day of the Dead, he plans to sneak off and take part in a music competition but his grandmother destroys his guitar. Needing a new instrument he breaks into the tomb of his hero, legendary musician Ernesto de la Cruz, to borrow his guitar. 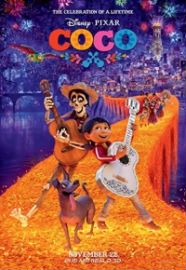 Miguel came to the world of the dead, which is a gorgeous fantasy world. All the spirits can return to earth to visit their loved ones on the day “Day of the Dead”, as long as someone will offer their pictures on the altar, they can walk across the Petal Bridge and return to earth without any problems.
Here he found the family and learned through conversation that originally his own family was incredibly fond of music. But because the year coco’s father, that is, Miguel’s great-great-grandfather in his youth because of their own musical dreams, never return, which led to their family now so repulsive to music, and asked to destroy all the portraits of great-great-grandfather, not allowed to remember his appearance.
Finally, Miguel found his great great grandfather and learned that the reason why he could not return home was that he was framed. Thus, Miguel set out to reconcile his family with his great great grandfather and eventually succeeded in saving his great-great-grandfather.
Miguel, the main character, keeps pursuing his dreams, while his relatives play the role of “blockers” of his dreams, and between his dreams and his relatives, he chooses his dreams. When he was lost in the process of pursuing his dream, his relatives still chose to support him silently behind him, and finally, he found out the importance of his family.
The animation of the whole film is very fine, comfortable picture quality can make people shine, I think this is also an important reason why it was named the best animated film, not only in the real world, the world of the undead is gorgeous and exquisite, and the picture of the film in gold tone makes this “undead” theme of the film is not cold, dark, or horror, instead people are more moved by its moving story and inspirational true feelings, so this is also a warm heart animation film.
What is death? When does our heart stop beating? When we lie in the grave? Neither, but when we are forgotten.
Besides, Coco isn’t the only movie worth seeing. You may check out 4khotvideo to find out where to watch free movies online. Here, you may see the most recent releases in addition to critically acclaimed films and blockbuster dramas. So instead of looking for websites that provide free movies, go to 4khotvideo right away.